Anne Moses, President & Founder, IGNITE.  Anne Moses has more than 25 years' experience in social justice and political organizations across the non-profit, political, and academic sectors with a focus on women and girls. In 2010, Anne founded IGNITE, a nationally recognized 501c3 that is building a movement of women who are ready and eager to become the next generation of political leaders. IGNITE has grown rapidly to become the largest and most diverse young women’s political leadership program in the country. Anne's previous senior leadership positions as Chief Operating Officer for Emerge America and Majority Council Director for EMILY’s List informed her passion and expertise in the arena of gender parity in political leadership. Throughout her career, Anne has also worked as a consultant in the non-profit and philanthropic arenas, with clients across the environmental, veterans affairs, domestic violence, and health and human service sectors. She has served as Principal Investigator on federal, state and local evaluations regarding the impact of welfare and health care reform on low-income individuals and communities. Anne and her work have been featured on CBS, CNN, NPR, Fox News, Marie Claire, Cosmopolitan, Vox, Bustle, Refinery 29 as well as numerous international and domestic articles on women and leadership. Anne holds a Ph.D. from U.C. Berkeley, an MSW from New York University, and a B.A. from Middlebury College. You can reach Anne at anne@IGNITEnational.org

Sara Guillermo, Chief Program Officer. Sara has extensive experience in youth leadership, curriculum development and program management having developed and led youth empowerment and community service programs at BuildOn and Aspire Public Schools for a decade prior to joining IGNITE. Sara started with IGNITE managing our high school programs and was quickly recruited to administer statewide and then national programming. Under Sara’s leadership, IGNITE has refined and developed new programs and brought them to an ever-expanding audience of young women across the country, supervising program staff and fellows in multiple states and managing our evaluation process. Sara holds an MSW from the University of Denver and a B.A. in Psychology from UC Santa Cruz. You can reach Sara at sara@IGNITEnational.org

Amy Zucchero, Chief of Resource Development & Communications. Amy brings 15+ years of experience championing women’s rights to IGNITE. As a member of The Representation Project’s founding team, she helped raise significant funds and national attention for the organization’s efforts to challenge the media’s portrayal of women and girls. She was also instrumental in raising production funding for the organization’s documentary The Mask You Live In. Amy spent seven years with the Women’s Funding Network, a global association of foundations investing in women-led solutions.  She comes to IGNITE from the SF-Marin Food Bank where she was a prominent member of the Leadership Gifts team as a Major Gifts Officer.  Amy holds a BA in History from University of California Santa Barbara and a Masters in Public Administration from the University of Massachusetts Amherst. You can reach Amy at amy@IGNITEnational.org

Kristin Hayden, Chief Partnership Officer. Kristin has a long history as a social entrepreneur, having founded OneWorld Now!, an after-school foreign language learning and global leadership program for low-income and minority youth, which has been hailed as one of the most innovative after-school programs in the nation. Kristin is also one of the founding members and Official Spokesperson for the Global Access Pipeline (GAP), a national consortium whose mission is to increase the representation, preparedness, and retention of underrepresented groups in the international arena and has been recognized for her work as an Ashoka Fellow. She is a high-energy, sought-after speaker on diversity, women’s leadership and social entrepreneurship for audiences ranging from high school-aged youth to aspiring change-makers and brings all these dynamic skills to IGNITE. You can reach Kristin at kristin@IGNITEnational.org.

May Nazareno, Director of Major Gifts, Northeast. May mobilizes IGNITE's east coast community, making it possible for a new generation of young women to change the face of our democracy. As a native New Yorker, May has a long and successful track-record developing resources for a wide range of non-profits and civically minded organizations in New York City.  May’s fundraising career began at Stanford University’s Medical School and then continued in the arts, education and social services in New York. May spearheaded development efforts at the National Organization for Women, New York City, and their charitable partner, Women’s Justice NOW. May increased their unrestricted funds, trained dozens of feminist activists in fundraising best practices, and raised the profile of their annual gala, gaining the attention of corporate, foundation, and political stakeholders. Prior to that, she worked with the Population Council, where she kickstarted significant support for their latest contraceptive technologies. You can reach May at may@IGNITEnational.org.

Kirsten Rogers, Communications Director. Kirsten’s passion is cultivating thriving communities through online engagement and digital communications. Fostering authentic connections is one of Kirsten’s core values, something she has been doing for over 12 years in both the public and private sectors, specializing in international education, social and human services and health. Kirsten earned her Masters in Public Administration from the University of Washington Daniel J. Evans School of Public Affairs and served two years in Morocco with the Peace Corps’ Small Business Development program. She speaks Moroccan Arabic and hopes to master French and Spanish one day. Through her consulting practice as a Social Communications Strategist, Kirsten guided startups to successful launches and small businesses to build loyal and engaged customer communities. In her spare time, Kirsten appreciates travel, getting lost in bookstores, playing with her dogs, and volunteering. You can reach Kirsten at social@ignitenational.org and on Twitter as @KirstenLeah.

Tierra Stewart, Fellowship Program Director. Tierra joined the IGNITE team with more than seven years of experience in community organizing, youth development, and non-profit work. Before joining IGNITE Tierra served as a Program Manager at After-School All-Stars, overseeing the expansion of comprehensive after-school programs in Washington, DC’s Ward 8 community. Tierra received her B.S in Political Science from Ohio State University. During that time, Tierra orchestrated numerous community events to raise awareness and resources for homeless youth in Columbus, Ohio. For this work, Representative Anne Gonzales of the Ohio state legislature recognized Tierra as one of Ohio’s most exceptional young citizens and future leaders. Tierra is passionate about being a part of the solution in closing the achievement gap by helping to provide innovative models that prepare future leaders to thrive. You can reach Tierra at tierra@ignitenational.org.

Michelle Burgess, Southeast Program Director. Michelle Burgess joins IGNITE with over 11 years in education and nonprofit experience. As a native Houstonian, Michelle is excited to support work both locally and across the Southeast Region specifically in empowering young women. Prior to joining the IGNITE team, Michelle most recently led the Talent Acquisition Team at YES Prep Public Schools and oversaw all recruiting and hiring for a charter management organization serving over 12,000 students. Additionally, Michelle has worked for Education Pioneers leading programming across the Southern Region and working with high school students in a college access program called Genesys Works. Michelle graduated from Texas A&M University with a degree in English and lives in Houston with her adorable pup, Millie, and crazy cat, Chloe. You can reach Michelle at michelle@IGNITEnational.org.

Whitney Thomas, Associate Director of Major Giving. Whitney Thomas is a passionate advocate for women in Texas politics. Whitney is a graduate of Southern Methodist University and Texas Woman's University and has served in countless leadership roles, including as the North Texas Regional Director of Texas College Democrats and founding Executive Director of Elect Her on the SMU campus. Whitney is also a Phi Theta Kappa honor society member, graduate of New Leadership Texas, Falk Scholar, Maynard Scholar and recipient of the SMU Betty Jeanette Maynard Award for Excellence in Women’s and Gender Studies. Whitney is committed to public service and currently serves as an appointed official on two boards for the City of Farmers Branch, and as an elected precinct chair. You can reach Whitney at whitney@IGNITEnational.org.

Jocelyn Yow, Policy Manager. Jocelyn has over five years of experience in politics and has worked at all levels of government. She won her election for Eastvale City Council in Riverside County with a 40 point margin in November 2018, at the age of 23, and she went on to be the first woman of color serving on the city council. Prior to joining IGNITE, Jocelyn worked for Congressman Gil Cisneros and Speaker Nancy Pelosi. As the daughter of a Chinese-Malaysian immigrant and a Vietnamese refugee, she has deep empathy for immigrants and is committed to uplifting her community. In recognition of her community service, she has received the Rising Star Award from the California Democratic Party, Asian Pacific Islander Caucus and was recognized by Norco College as the Alumnus of the Year, in addition to being featured in the Inland Empire Magazine. Jocelyn is an alumna of Norco College and the University of California, Berkeley, and is currently pursuing her master’s degree in government at Harvard Extension. You can reach her at jocelyn@ignitenational.org.

Cydnei Drake, Program Growth Manager. As Program Growth Manager, Cydnei oversees programming for our K-12 licensed programs and marketing nationwide. She previously served as the Texas Program and Donor Relations Coordinator. Cydnei is an alumna of both The University of Texas at Austin and the University of Texas at Arlington earning her Bachelor and Master of Social Work, respectively. Cydnei is passionate about social justice, advocacy and all things Texas politics! She enjoys giving back to her community and currently serves on several committees for Carrollton-Farmers Branch ISD and is a member of The Junior League of Dallas. You can reach Cydnei at cydnei@ignitenational.org

Esmeralda Cortez Rosales, West Coast Program Manager. Esmeralda Cortez is passionate about making sure everyone has a seat at the table. Before joining IGNITE as the West Coast Program Manager, Esmeralda was a legislative intern for Congresswoman Barbara Lee in Washington D.C. and also served as an intern in Congresswoman Lee's Oakland campaign office. During her time at UC Berkeley, Esmeralda worked for IGNITE as a High School facilitator in East Oakland, managed Mya Whitaker’s campaign for Oakland City Council in 2018, and was sworn-in as an Oakland Youth Commissioner. In these roles Esmeralda emboldened her community to get involved in politics, gave recommendations and resolutions to Oakland City Council and helped transfer political power to underserved communities. Esmeralda is also an alumnus of our high school programming and was awarded the IGNITE 2013 Fems with Fervor award. Esmeralda is excited to continue to build a nation where young women own their political power and pursue meaningful change. You can reach Esmeralda at esmeralda@ignitenational.org 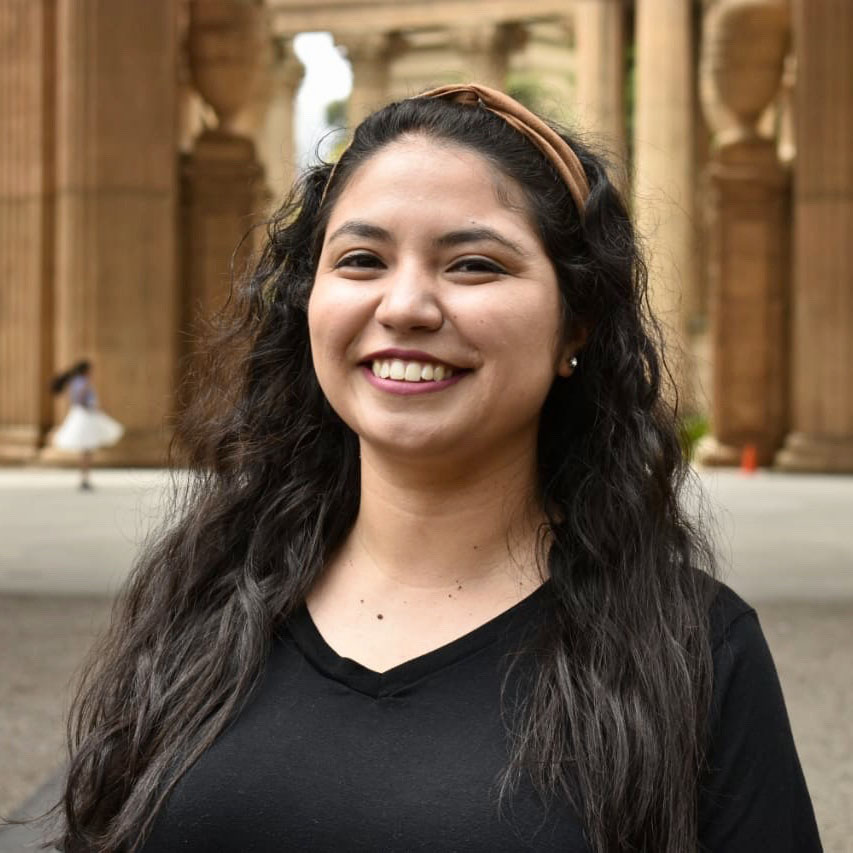 Elizabeth Castañón, Operations Manager. Born and raised in Oakland, Elizabeth is an advocate for empowering women and minority communities. She enjoys working as part of a team to improve her community. While studying at the University of San Francisco, she was President of Latinas Unidas; a culturally focused organization and helped create opportunity for social and academic success. She is excited to join the IGNITE team as Operations Manager and looks forward to applying her passions for social justice. In her spare time she enjoys arts and crafts, running and cheering on her hometown sports teams. You can reach Elizabeth at elizabeth@IGNITEnational.org

Deshani Semaan, Communications Coordinator. Deshani has over three years of experience in the marketing field. She has worked primarily at nonprofit organizations, ranging from public charities to educational institutions and more. Deshani graduated from the University of Central Florida, where she focused her studies on the intersection of communications and sociology. With a passion for serving underrepresented communities, Deshani hopes to help increase visibility for marginalized groups in politics and beyond. In her spare time, she enjoys editing videos, spending time in nature, and exploring new places. You can reach Deshani at deshani@ignitenational.org.