Debbie Wasserman Schultz has dedicated her public life to serving South Floridians and standing up for justice, equality, and opportunity wherever and whenever it is threatened. First sworn in to the U.S. House of Representatives in 2005, the Congresswoman has also demonstrated her ability to pass meaningful legislation in a bipartisan fashion.

After announcing her own battle with breast cancer in 2009, Wasserman Schultz introduced the EARLY Act, a piece of legislation designed to increase breast cancer education and awareness. The EARLY Act became law as part of the Affordable Care Act, signed by President Barack Obama in 2010. Wasserman Schultz also worked with Republican Congresswoman Renee Elmers to write and pass the PALS Act, which helps increase young women’s access to mammograms. A leading advocate for women and girls, Congresswoman Wasserman Schultz introduced the Rape Survivor Child Custody Act to encourage more states to allow women to terminate the parental rights of a rapist, based on clear and convincing evidence. The bill was signed into law by President Obama in 2015.

Currently, Wasserman Schultz serves as a Cardinal on the Appropriations Committee, making history as the first-ever woman to Chair the Military Construction and Veterans Affairs Subcommittee, where she is committed to ensuring our nation’s veterans have the resources and support they need. In addition, she serves on the Homeland Security Subcommittee, as well as the Energy and Water Subcommittee, where Wasserman Schultz is a leading advocate of the efforts to protect the Florida Everglades, take bold action on climate change, and safeguard our air and water. In the 116th Congress, Wasserman Schultz also serves on the Committee on Oversight and Reform (COR), which has vast jurisdiction over the government and private sector and plays a key role in overseeing the Trump Administration. 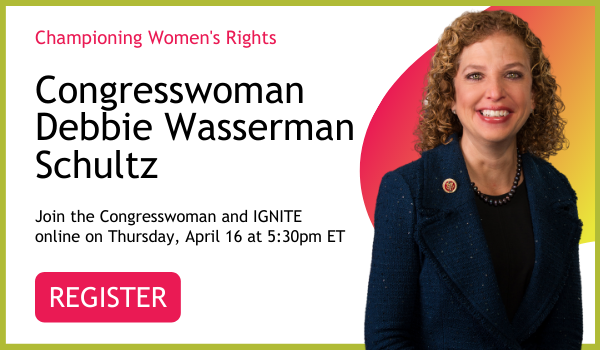 The Covid-19 pandemic has created a disproportionate burden on women who are both overrepresented in many frontline jobs and simultaneously bear the brunt of looking after family members and children. Hear from Florida Congresswoman Debbie Wasserman Schultz about why she is passionate about women's rights and what she and others in Congress are doing to ease the impact on women during this global pandemic. REGISTER